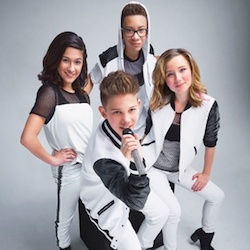 Tickets available at all Vallitix locations including the Fox Theater Box Office, Charge by phone 661-322-5200 and Vallitix.com

KIDZ BOP, the #1 music brand for kids, is bringing its Make Some Noise Holiday Tour to Bakersfield at the Fox Theater on Saturday December 5, 2015! The KIDZ BOP Kids will perform holiday classics in addition to favorites from the best-selling KIDZ BOP series. The family-friendly Make Some Noise Holiday Tour is a fun and festive event that’s guaranteed to get kids and parents in the holiday spirit! KIDZ BOP fans will also get a special sneak peak of the new music video from Build-A-Bear Workshop’s Honey Girls at the show.

The KIDZ BOP Kids have been named Billboard Magazine’s “#1 Kids’ Artists” for the fifth consecutive year. In 2014, KIDZ BOP released the “#1 Kids’ Album,” KIDZ BOP 25, and outsold some of the year’s biggest artists, including Pharrell Williams, Ariana Grande, and Iggy Azalea. The latest album in the best-selling series, KIDZ BOP 29, was released in July and debuted at #4 on the Billboard Top 200 chart.