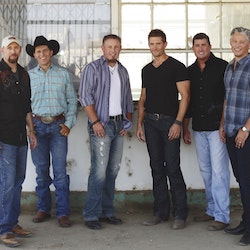 Tickets available at the Fox Theater Box Office, Charge by phone 661-324-1369 and Ticketfly.com

Six guys from Bakersﬁeld, a quirky name and 5 songs…that was the beginning of what would eventually be called “…one of the biggest independent music successes in history…”
Starting in 1992 and made up of members Rick Russell, Scott Meeks, Jason Theiste, Darrin Kirkindoll, Aaron Casida and Josh Graham, the group quickly made their way around the west coast music scene, building a ground swell of support from radio stations and fans with their unique musical style and high energy performances. Songs like “My Girlfriend Might,” “Red Rock” and “I’m A Cowboy” propelled them forward through the crowded country music scene of the mid 90’s. It wasn’t long before Nashville took notice and the ‘Dillos signed with powerhouse label Curb Records, joining a long list of artists like Tim McGraw, LeAnn Rimes, Wynona, Hank Williams, Jr. and more. Over the next few years, the Armadillos maintained a relentless touring schedule across the U.S. and released a self-titled album on Curb, led by the single “Let Your Heart Lead Your Mind” that helped put the band on multiple Billboard charts. They recorded another independent album a few years later and continued to tour much of the west coast until playing their ﬁnal show in 2005.
That appeared to be the end of the six as a group, but it seems a spark remained, and in 2015 the band stepped back into the studio together to work on more music. Along the way, they released “The Other California,” a song that oﬀered a look at the rich culture and less recognized side of the Golden State, and “Eight Second High,” a nod to the rodeo scene that was such a large part of the ‘Dillos journey years before. It’s anyone’s guess where the road may lead for the Bakersﬁeld natives, but one thing seems clear…it ain’t over yet…