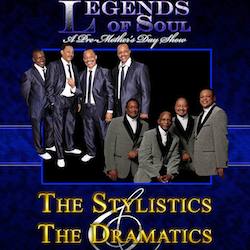 CONTEST: The Stylistics and The Dramatics

Win two tickets to see The Stylistics and The Dramatics
May 9th at the Bakersfield Fox Theater.

On behalf of Greater Educational Milestones (GEMs), Andern Educational Research, Inc. presents Legends of Soul at the Fox Theater on Saturday, May 9, 2015 show time 8:00 p.m. This Pre-Mother’s Day Benefit Concert will feature The Legendary Stylistics and The Dramatics.

100% of the net proceeds will benefit GEMs, which gives low-income students of color who have demonstrated high academic achievements opportunities to attend private high schools and receive scholarship funding. Make this Mother’s Day one she can’t forget by bringing her out to see these two legendary groups perform some of their greatest hits. The Stylistics with songs like: Stop, Look, Listen, Betcha by Golly Wow, You Make Me Feel Brand New. Remember The Dramatics hits: Whatcha See is Whatcha Get, Me and Mrs. Jones, In the Rain, Be My girl just to name a few. This is one spectacular show you don’t want to miss.

The Stylistics
The Stylistics are a soul music vocal group, and were one of the best-known Philadelphia soul groups of the 1970s. They formed in 1968, and were composed of singers Russell Thompkins, Jr., Herb Murrell, Airrion Love, James Smith, and James Dunn. All of their US hits were ballads, graced by the soaring falsetto voice of Russell Thompkins, Jr. and the lush productions of Thom Bell, which helped make the Stylistics one of the most successful soul groups of the first half of the 1970s.” During the early 1970s, the group had twelve consecutive U.S. R&B top ten hits, including “Stop, Look, Listen”, “You Are Everything”, “Betcha by Golly, Wow”, “People Make the World Go Round”, “I’m Stone in Love with You”, “Break Up to Make Up”, and “You Make Me Feel Brand New”.

The Dramatics
The Dramatics are an American soul music vocal group, formed in Detroit, Michigan, in 1964. They are best known for their 1970s hit songs “In the Rain” and “Whatcha See is Whatcha Get”, both of which were Top 10 Pop hits, as well as their later 1994 collaboration Doggy Dogg World with Snoop Dogg, a top 20 hit on the Billboard Rhythmic Top 40.