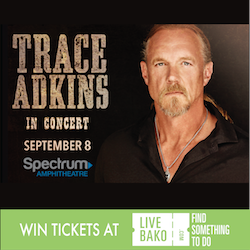 2 chances to enter to WIN a pair of Tickets:
1. Tag a friend you’d take on this Facebook Post OR
2. Sign up for with your email address.
Winner will be chosen at random.

In the fifteen years since his platinum debut, Trace Adkins has released ten studio albums, three greatest hits packages, thirty chart singles. He has racked up four Grammy nominations, five ACM and CMT awards. Accolades like that – along with sales in the tens of millions – explain the respect Adkins has earned from both Country fans and the industry alike.
But there’s more. In recent years, Trace has made his mark as a TV and film actor, a voiceover artist, an author, a social commentator, a participant on NBC’s Celebrity Apprentice — and even the inspiration for a series of comic books.
Along the way, Trace has endured his share of well-publicized tribulations and the release of his latest album – Proud To Be Here – would be saddled with the same loss (and luck) that have shadowed Trace all his life. In June of 2011, as the finishing touches were being made to the upcoming album, the Nashville-area home Adkins shared with his wife and three of his five daughters was entirely destroyed by fire. True to form, Trace thought first of his family’s safety, then steered the outpouring of fan’s support toward the Red Cross…then got back to work.
Adkins’ strength, focus and passion for fully-lived life infuse every bit of his new project. Proud To Be Here is the perfect distillation of Trace’s art, displaying once again his ability to pour emotional truth into his music, whether it is of the tender or the rowdy variety. The project celebrates committed love in songs like “Million Dollar View,” “That’s What You Get,” and “Always Gonna Be That Way,” the joys of the simple life in “Days Like This” and “Poor Folks,” the lighter side in “It’s A Woman Thang” and “Love Buzz,” and life’s highest priorities in “It’s Who You Know.”
“There’s so much on this record that’s autobiographical,” says the man with the soul-stirring baritone. “I draw from the best writers in town, and time after time they capture things I’ve experienced.”
The CD’s title track is a case in point.
“Chris Wallin, Aaron Barker and Ira Dean wrote that song for me,” he says. “I’ve been close to death several times in my life, and they know me well enough to know what I’ve carried away from that.”
Perhaps nowhere, though, do life and art come together as poignantly as they do with the project’s first single, “Just Fishin’.” The ode to father-daughter togetherness captures Trace’s own approach to fatherhood—he taught his daughters to fish—and the video, filmed at the family’s farm, where the family moved after the fire, features his youngest, Trinity.
“I think the reason she was so comfortable in the video,” he says, “is because it’s her place. It has been all her life. All of these people with the cameras and equipment were coming for a play day at her farm and that’s the way we approached it.”
In addition to the ten songs on the regular CD, fans wanting more can purchase a 14-song deluxe edition including four more tracks—two penned by Trace—or a 16-song package including those four plus two live cuts available at Target stores. The additional songs include Trace’s “Semper Fi,” dedicated to the Marine Corps, and “If I Was a Woman,” a hilarious duet with buddy Blake Shelton, who teamed with Trace for the chart-topping “Hillbilly Bone.”
For all but the first single, which was produced by Michael Knox, Trace worked with co-producers Mark Wright and Kenny Beard.