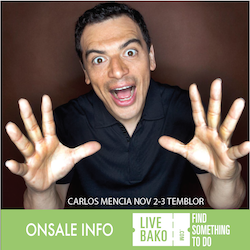 Tickets available at Temblor Brewing Company and online at Eventbrite.com

My name is Carlos Mencia and I am a comedian. I was born in San Pedro Sula, Honduras as the 17th of 18 children. I don’t remember this but at three months old, my parents sent me to live in East L.A. to be raised by my aunt & uncle. During my teens, I returned to honduras to spend some time there on my family’s ranch and away from the gang violence of East L.A.

I came back to Los Angeles and graduated from Garfield High School in 1985. I was pretty much a nerd in high school and went to study Electrical Engineering at Cal State LA. Months before completing my degree there, I dropped out to pursue stand-up comedy. I first showcased at the Laugh Factory before becoming a regular at the Comedy Store, where I would perform as often as I could.

After a few years in the business and touring nationally with the Improv circuit, I self-produced several of my own comedy albums & dvds. All that work and dedication on the road led to an opportunity of developing “Mind of Mencia” on Comedy Central in 2005. I spent four seasons doing the show and decided to move on to develop new projects for both film and network television.

If you ain’t laughin’
You ain’t livin’