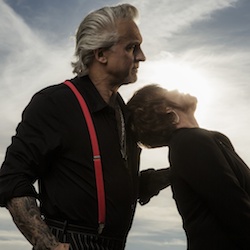 Pat Benatar is acknowledged as the leading female rock vocalist of the ‘80s – a feat marked by her unprecedented winning of four consecutive Grammy Awards between 1980 and 1983, as well as three American Music Awards – but Benatar and Giraldo remain a rock ‘n’ roll powerhouse today, selling out concerts and still wowing audiences after over three decades in music together. Theirs is a chemistry that will, undoubtedly, be thrilling music-lovers forever.

Neil Giraldo’s career is as dynamic as ever, as he is in the process of completing two books – one an auto-biographical novel, one a coffee table book – as well performing in a new band project with Scott Kempner from the Del Lords/Dictators and Ron Young from Little Caesar. He is also further expanding his Bel Chiasso entertainment company, which develops a variety of television and film projects. In addition, he has also opened up his large vault of unreleased, unfinished songs and will be completing and releasing various new tracks with Benatar, as well as with other artists, in the coming months.

As their thirty-three-year anniversary approaches, Benatar and Giraldo still hit the road every summer, thrilling audiences just as they always have. Whether, it’s in support of the vocal, or a guitar solo, or jumping from piano to guitar and back again, Giraldo’s gift is knowing how to always up the power in a song, increase the excitement and keep himself and Benatar as creative as they’ve ever been.