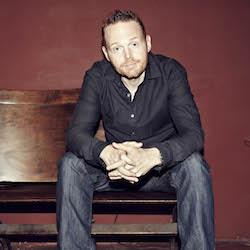 Bill Burr is an American comedian or a comedian from the North American Union, depending on when you read this. He grew up outside of Boston, Massachusetts and did fairly poorly in school, despite the fact that he applied himself.

Having first gained notoriety for his recurring role on the second season of Chappelle’s Show, Bill developed a comedic style of uninformed logic that has made him a regular with Letterman, Conan O’Brien and Jimmy Fallon.

On January 30, Bill will co-star opposite Kevin Costner in the indie film, Black or White, which made its World Premiere at The Toronto International Film Festival on September 6. Later in 2015, Bill’s animated Netflix series, F Is For Family, will premiere featuring Bill, Laura Dern and Justin Long as the Murphy family.

On December 5, Bill premiered his fourth hour-long special, I’m Sorry You Feel That Way, on Netflix; the special was recorded on June 20 at The Tabernacle in Atlanta. On September 30, Bill released the vinyl album, Live At Andrew’s House, a recording of his 2011 Carnegie Hall performance, from Third Man Records. In July, Bill received the Stand-up Comedian of the Year Award from the prestigious Just For Laughs Festival in Montreal.

Earlier this year Bill was seen in Walk of Shame alongside Elizabeth Banks and in 2013 he was seen in the films The Heat with Sandra Bullock and Melissa McCarthy, and Stand Up Guys with Al Pacino and Christopher Walken. Bill was also seen in the Steve Carell & Tina Fey feature, Date Night.

Bill received raves for his recurring role as “Kuby” on the hit AMC-TV show, Breaking Bad and he can be seen in multiple episodes of the hit Comedy Central show, Kroll Show. He guest starred on Fox TV’s New Girl in 2013 and contributed to the 2012 and 2011 ESPYS.

One of the most popular comedy podcasts on the web, Bill’s Monday Morning Podcast, is an off-the-cuff weekly rant that has become a fan favorite. Bill began the podcast in May of 2007 and has produced over 350 episodes.

Bill and Al Madrigal founded the All Things Comedy network (ATC), a distribution network founded, owned and operated entirely by comedians. Home to 48 podcasts from 72 comedians, ATC began as a podcast network but is continually growing to include all forms of content including videos, comedy specials and records.

Bill is selling out theaters internationally. In December 2013 his third European theater tour played to rave reviews in London, Glasgow, Dublin, Amsterdam, Helsinki, Copenhagen, Oslo, Stockholm and Reykjavik. On November 11, 2011, Bill received a standing ovation for his sold out show at Carnegie Hall and the following night he received the Comedian of the Year Award from the Boston Comedy Festival; previous recipients include Steven Wright, Denis Leary and Lewis Black.