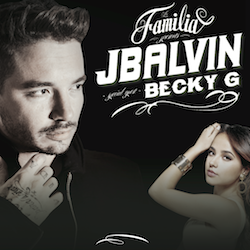 Tickets available at all Ticketmaster locations, Ticketmaster.com, The Rabobank Arena Box Office, or charge by phone 800-745-3000

Young Latin music fans are already rejoicing across social media at news that Latin Music’s two fastest-rising millennial stars are taking to the road together this fall, as J Balvin announces his first headlining tour with special guest Becky G. The skyrocketing Colombian urban trailblazer will take to the stage at theaters across the United States in September and October, with support from the young Californian bicultural star.

José Álvaro Osorio Balvín, known artistically as J Balvin, is a Colombian reggaeton singer. Balvin was born in Medellín, the largest city of Antioquia and Colombia’s second largest city, where he became interested in rap, dancehall, champeta and bachata at a young age. He is known for his songs “Yo Te Lo Dije”, “Tranquila”, “Ay Vamos” and “6 AM”.