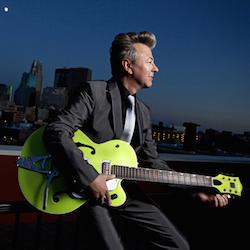 Tickets available at all Vallitix locations including the Fox Theater Box Office, Charge by phone 661-322-5200 and Vallitix.com

The Brian Setzer Orchestra (sometimes known by its initials BSO) is a swing and jump blues band formed in 1990 by Stray Cats frontman Brian Setzer. The group covered Louis Prima’s “Jump Jive an’ Wail”, which appeared on Prima’s 1957 album The Wildest!. The BSO’s follow up single was “Gettin’ In the Mood.”
In 1990, Setzer organized the orchestra, styled as a big band which included full sections of trumpet, trombone and saxophone players, and a rhythm section with Setzer on guitar and vocals. There is also piano, upright slap bass and drums in the band. The orchestra began playing clubs in and around Los Angeles, USA and was eventually signed to Hollywood Records. The band was notable as being the first ever big band to be lead by a guitar, and Setzer has talked about how he knew at the time it was “something that had not been done before, there had not been a guitar, leading a big band”.

The band was also notable for mixing Rockabilly/Rock and Roll with Big Band Swing.

The group released its first two albums in 1994 and 1996. There had been a change of labels, to Interscope Records. The band also had a slight change in orchestration, dropping the piano player. They were followed by The Dirty Boogie (1998), a mix of Setzer-penned originals and covers of swing standards. The orchestra then embarked on several U.S. and world tours.

Setzer persuaded Frank Comstock, who had made an arrangement of “The Nutcracker Suite” on one of the Christmas albums and then retired, to create arrangements for Setzer’s 2007 album, Wolfgang’s Big Night Out. The orchestra cancelled its 2008 Christmas tour but went back on the road in 2009.

In 2009 the orchestra released a new album titled Songs from Lonely Avenue. This was the first album to feature all original songs written by Setzer. Frank Comstock also worked on horn and string arrangements for the album.