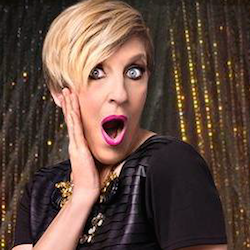 Tickets available at the Fox Theater box office, Charge By Phone 661-849-4369 or online at ETix.com.

Lisa Lampanelli is Comedy’s Lovable Queen of Mean. Heralded as “more than a standup — a standout,” by comedy legend Jim Carrey, Lampanelli is a cross between Don Rickles, Archie Bunker, and a vial of estrogen. She has won accolades from The King of All Media Howard Stern, who called her “a true original and a brilliant comedy mind who’ll steal the show every time.’

This equal opportunity offender is a regular on “The Tonight Show with Jay Leno” and Howard Stern’s Sirius satellite radio shows. And she has appeared on “Late Show with David Letterman,” “Lopez Tonight”, “Chelsea Lately”, and “Jimmy Kimmel Live”. And, she is thrilled to have been asked to join the cast of NBC’s “Celebrity Apprentice,” Season 5.

In 2009, Lisa entered the ranks of comic greats and premiered her first ever one-hour HBO comedy special, “Long Live the Queen,” to tremendous ratings. That same year, her autobiography, “Chocolate, Please: My Adventures in Food, Fat and Freaks,” hit bookstores to critical acclaim. As a writer, Lisa also pens the monthly Women column in Playboy magazine. And in Fall 2012, Lisa will bring her talents to Broadway when she mounts her one-woman show, “Bring Back the Fat Chick.”

Lisa’s rise to the top of the comedy food chain began in 2002 when she was the only female comedian invited to skewer Chevy Chase on the NY Friars Club Roast on Comedy Central. She soon became one of the few white comedians to perform on BET’s “Comic View,” cementing her huge crossover appeal. A year later, she rocked Comedy Central once again in her back-to-back appearances on “Premium Blend” and on the enormously rated “Roast of Jeff Foxworthy” — again, the only female invited to roast the man of honor.

Lisa appeared on Comedy Central’s “Last Laugh 2005” and her headlining performances on the Comedy Central roasts of Pamela Anderson and William Shatner, among others, received national attention. Lisa’s 2005 one-hour special, “Take It Like a Man,” was a hit with the comedy network yet again, and the CD and the DVD of the same name hit #6 on the comedy charts. Then, in January 2007, Lisa’s second one-hour special, “Dirty Girl,” debuted on Comedy Central and Warner Bros. Records, and reached #4 on the charts. Soon thereafter, “Dirty Girl” was nominated for a Grammy Award for 2007’s Best Comedy Album of the Year. Her 2011 Comedy Central special, ‘Tough Love,’ follows in the tradition of Lisa’s previous one-hour specials by featuring her pulling-no-punches insult comedy and in-your-face humor.

Lisa has also taped several specials for VH1, MTV, and CMT, and was featured on the “Best of” episode of Comedy Central’s “Tough Crowd with Colin Quinn.” Known for saying things that most people are afraid to think, Lisa Lampanelli’s raunchy, gut-busting performances are wildly popular at theaters across the U.S. and Canada. And her roasts of Donald Trump, David Hasselhoff, Flavor Flav, and Gene Simmons, plus her turn as roastmaster on the Comedy Central Roast of Larry the Cable Guy are the stuff of which legends are made.

Also this year, Lisa was thrilled to be cast as Aunt Josie in the highly anticipated feature film debut from “Sopranos” creator David Chase, starring James Gandolfini. She has also appeared on the big screen in Judd Apatow’s “Drillbit Taylor,” starring Owen Wilson, and “Larry the Cable Guy: Health Inspector” and “Delta Farce,” with her buddy Larry. She also starred in the feature film, “The Aristocrats”, based on the joke of the same name.